The Paradise glided along the waterway, slowly leaving Tampa behind.  On two decks in the front of the ship, passengers stood watching the city disappear and the water unfold before them.  Though this was only my second Singing at Sea cruise, I had a feeling that this part of the trip would become tradition.  There’s something exciting about watching the land recede in the distance!  Suddenly, someone shouted, “Look at the row boats!”  There, in the channel that ran parallel to the one our ship was in, five row boats were clipping toward the end of the waterway.  Someone next to me laughed, “Hope they don’t run into us…”  Speculation began.  Couldn’t they see the cruise ship?  Or were they so entranced in their training they didn’t notice the 70,367 tons of metal coming right at them?

Without any notice, The Paradise blasted a warning.  Needless to say, the horn was very loud 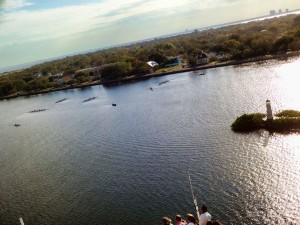 and everyone on deck jumped!  Nervous laughter followed.  It’s amazing how fast a row boat can stop!  😉  But the rowers weren’t the only ones out that day…  Alongside us, a lady in a kayak paddled very close to the ship and hollered, “Where y’all going?”  A few folks on the deck below bellowed, “Cozumel!”

I guess that was their most anticipated port!  LOL

Me?  I was looking forward to both of the ports we would visit – George Town in the Grand Caymans and the island of Cozumel, belonging to Mexico.  I never thought traveling overseas, or more appropriately, on the seas, would be a title I could claim.  Yet, it is!  However, I don’t think the title world traveler would be half as much fun if it weren’t spent with other Believers.  Templeton Tours charters the whole ship and closes the bars and casinos, which gives the trip a unique environment!  Even standing at the rail, I struck up a conversation with the older gentleman standing next to me, who was happy to share how many times he and his wife had been on Singing at Sea and why they love it so much.  The full charter Christian cruise gives you the alternative of being with like-minded people and eliminates some of the undesirable experiences of regular cruises.

Time goes fast when you’re watching the waves go by, and before I knew it, it was five o’clock – time to get ready for the first seating in the Elation Dining Room.  When cruising, food is always available, but the evening meals are extra special!  You can expect three courses, attentive service and a server who will be able to call everyone at your table by name after the first night.  Monday evening I ordered escargot, a pumpkin pot pie and Carnival’s famous chocolate melting cake for dessert.  Delicious! 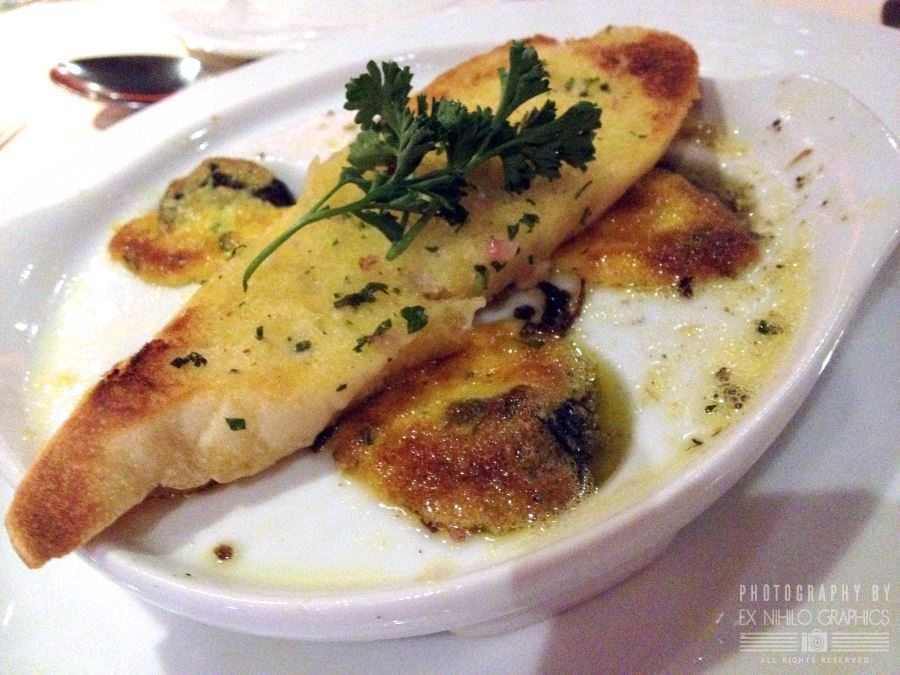 The Normandie Lounge was the main theater on The Paradise, and after dinner my host group was singing there.  As Jerry Goff introduced The Mark Trammell Quartet, he teased, “Mark sang with the original quartet – Matthew, Mark, Luke and John!”  LOL  MTQ kicked off their set with Guide Me Oh Thou Great Jehovah and their new radio single, God’s Been Faithful.  A few more tunes followed before introductions and they were: When the King Comes to Claim His Throne, To Know He Knows Me and Wonderful Time Up There.  Mark introduced Randy first, “We are both Baptist preachers kids and grew up less than 30 miles from each other and didn’t know it!”  He went on to talk about the title song to their current project, You Walk Talks, and when he quoted the lyrics to the chorus, the audience finished it with him.  After singing Your Walk Talks, MTQ closed their set with The King is Coming. 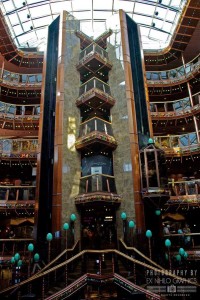 When exiting the Normandie Lounge, you will walk right into the Atrium with its glass elevators and grand staircase.  Just below the staircase is a stage, and as you can imagine on a Gospel Music cruise, someone was singing on that stage – Brian Free and Assurance!  As I was walking into the Atrium they were singing When We All Get to Heaven) (different from the hymn.) 🙂  Who wouldn’t stop and listen to the rest of their set?  Apparently, a lot of folks – for it was standing room only!  They did songs like When the Lord Says Do It, Tell It Like It Was, Peace In the Valley, Say Amen and Long As I Got King Jesus.  “I’m sure everyone here tonight has something to be thankful for,” Bill said, before his solo, Say Amen.  The Atrium is always a unique setting – several decks overlook the staircase in a perfect circle and chairs are lined up against the rail for folks to occupy.  Among the crowd, you usually see the group’s families.  It was cute to see Bill Shiver’s baby boy peek over the rail at times, securely held in Mom’s arms.

As the evening progressed, there were plenty of activities to attend.  Groups were featured on every stage, the Paris Restaurant was filled with goodies (a.k.a. the ice cream machine) or you could sit and visit with friends in many of the sitting areas.  Whether you wanted to get around and see as much as possible or just stay in one spot and kick back, there were numerous opportunities for both!  The rest of the evening, I opted for the last one.  After all, it was vacation!